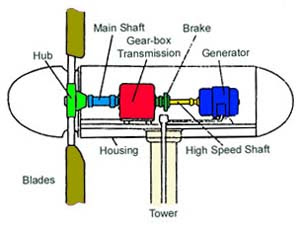 Ithaca, NY - The City of Ithaca and Tompkins County today completed a unified commitment to purchase wind power, the first joint wind energy purchase by a city and county in New York state.
The Municipal Electric & Gas Alliance (“MEGA”) arranged and subsidized the purchase of emission-free wind power, to be supplied by renewable energy marketer and developer Community Energy, Inc. These two government purchases bring the number of municipal and county governments purchasing wind energy in New York to 56.
“MEGA recognizes that wind energy generation is an important part of New York’s energy future,” said Barbara Blanchard, Executive Director of MEGA. “The subsidies are intended to encourage more New York cities and counties to step up and make a difference in their communities.”
MEGA, a non-profit organization with a public service orientation, offered a three-year subsidy to the city and county in support of their commitment to clean energy. MEGA will award Tompkins County and the City of Ithaca with subsidy checks at their respective monthly meetings, scheduled for February 1st and 7th.
Compared to the average generation mix in the New York electric grid, the environmental benefit of this purchase is equal to offsetting approximately one million pounds of carbon dioxide per year, the impact of which is equivalent to planting more than 68,000 trees or not driving 868,000 miles each year.
Community Energy President Brent Alderfer stated, “We all know that we need new energy supplies that won’t run out. The City of Ithaca and Tompkins County, with dollars from the Municipal Electric and Gas Alliance, are making that investment now. They are an example of leadership here at home, supporting wind generation of electricity with no smoke and no fuel.” Community Energy has led the renewable energy marketing effort in New York with the assistance of the New York State Energy Research and Development Authority (“NYSERDA”). In 2006, New York State expects to lead the eastern United States in wind powered electric generation.
Community Energy, Inc. (CEI) is a marketer and developer of wind energy generation founded in 1999. CEI has over 2 billion kilowatt-hours of wind energy sales, 40,000 residential and business customers and marketing arrangements with 18 investor-owned and municipal utilities. CEI cites its utility partners and customers, which include many of the largest retail purchases of wind energy in the country, as the reason for its success in bringing wind energy to market in new regions of the country. CEI has wind projects under development in the Northeast, Mid-Atlantic and Midwest. http://www.communityenergy.biz/index.html.
MEGA is a non-profit municipally based aggregator which goes to the open market to seek prices that are lower than what individual customers could achieve by purchasing electricity and natural gas commodities on their own. MEGA also offers its participants the opportunity to purchase wind power and it enables municipalities to review their current billings for accuracy, savings and efficiency. MEGA works with professional energy consultants and procurement specialists, at no cost to participants, to secure the best prices and terms available in today's complex and evolving energy marketplace. MEGA’s consultants assist in solving problems and monitoring changes in the complex regulatory process and private markets to benefit its participants. Since MEGA was established in 2001, participants have saved more than four million dollars. http://www.megaenergy.org/