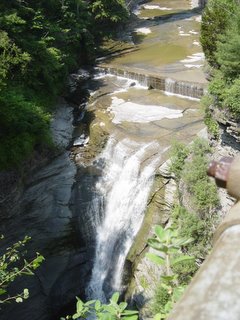 The loveliness of Ithaca's setting caught Joan Bokaer's eye when she passed through it on a cross-country walk for peace in 1990. Bokaer returned to found EcoVillage on West Hill in 1989. Today this experiment in cohousing and sustainable living, with 22 families involved, is drawing the attention of publications ranging from Earth Island Journal to Popular Science. The beauty of the region also inspired the Finger Lakes Land Trust, a group of Green activists, to buy up land to save it from developers' bulldozers.

It was the Ithaca countryside, in fact, that generated much of its alternative culture in the first place. Ithaca's politics were Republican-dominated before the mid-'60s, and the radical right made noise too; Glover remembers Ku Klux Klan rallies on West Hill during the early days of the civil rights movement. With the rise of the back-to-the-land movement in the late '60s and early '70s, some 50 communes popped up in the surrounding Tompkins County hills, with names like The Family, The Pad, Yea God!, and Lavender Hill. As these fizzled, many of their members found their way into town, where they set up hippie businesses: organic bakeries, craft shops, bookstores, the Green Star Co-Op. By 1981, the radicals had enough political clout to elect a city council member, Dan Hoffman. Radical influence and representation grew, and the town chose an openly socialist mayor, Ben Nichols, for three terms, from 1989 to 1995.
Today Hoffman is an attorney whose close-trimmed beard and natty suit and tie give him the air of a prosperous businessman from Idaho or Montana. He's still a man of the left-his current cause is the brand-new Citizen's Planning Alliance, which aims to keep a populist eye on city growth and development-but like many others in Ithaca's alternative community, he's matured. "Since the early '80s," he says, "issues of economic equity, the environment, race, and class have been regularly brought up in city government. They're always part of the debate. Ecological concerns are seriously considered when development plans are evaluated. Ithaca pioneered in creating access for the handicapped too, years before the Americans with Disabilities Act. On the other hand, alternative institutions like the Green Star Co-Op and the Alternatives Federal Credit Union have grown and shown the wider community that they have what it takes to keep a business running."

So while much of Ithaca remains a traditional clapboard Upstate town, where the "townies" eat porkchops(!) at the Royal Palms restaurant and the Birkenstockers nosh organically at Moosewood, the strength and savvy of the alternative presence has brought down many of the barriers between the cultures. Tompkins County Trust (founded in 1831), Ithaca's oldest bank, provided funding for EcoVillage-and brags about it in its publicity. The Farmer's Market, which runs from April to December every year and brings together "straight" farmers, small organic growers, and local craftspeople was described to me as a "happening," the "showcase and heartbeat of the spirit of Ithaca," and "a place where everybody goes."

The supermarket-sized Green Star Co-Op is another place where everybody, or nearly everybody, comes together under the alternative aegis. To wander its bright, well-stocked aisles with manager Laura Peters is a real education in local empowerment. Every Ithaca-produced foodstuff is carefully labeled as such, and it's quite a cornucopia: BGH-free milk from several area farms, Miami transplant Susie Gutierrez's line of seitan (wheat gluten) goodies, organic chicken raised by a former engineer and his partner, a onetime scholar of Japanese history. "We'll move other stuff off the shelves to make room for locally produced food," says Peters.
And then there's the Ithaca Hours system. To get the lowdown on it, I met Glover for lunch at Viva Taqueria. (This informal downtown Mexican cafe's "business-as-usual" rival, Taco Bell, recently closed its doors. Glover claims it as a victory for the Ithaca spirit; a more mainstream Ithacan I talked to cited the absence of a drive-thru window.) Glover's seemingly boundless energy has helped boost Ithaca's famed local currency into something of a national and international phenomenon since he founded the system in 1991. Ithaca Hours are now accepted along with Uncle Sam's banknotes in some 350 local businesses (and not only alternative ones). The $60,000 in Hours issued in the last five and a half years have been traded by some 2,000 people, generating an estimated $2 million in commerce since the little blue-, yellow-, orange-, and pink-tinged notes first appeared. There are now some 30 other local currency systems across the United States, Canada, and Mexico, all patterned after Ithaca's program; publications from the Observer of London to Coin World have extolled its virtues.

Despite the name, the Hours system is not a time-barter scheme (in which an individual performs a certain number of hours of work, then receives scrip entitling him or her to an equivalent amount of time from someone else). Ithaca Hours can be used just like dollars-for labor, or pizza, or swimming lessons. Some people even take part of their pay in Hours or accept change in Hours at businesses. Glover's organization circulates the money by issuing two Hours (equivalent to $20) to every individual or business willing to be listed in the group's newspaper, Hour Town, as Hours accepters. It also makes outright grants to worthy groups around town. All accepters have a vote on Hours policy (including the decision to put more Hours in circulation), which is set at monthly Barter Potlucks.

The point of Hours is, first of all, to add to the local money supply and keep local wealth circulating within the community and immediate region (they're valid within a 20-mile radius of central Ithaca) rather than being siphoned away to corporate headquarters elsewhere. But Glover will bend your ear on a whole panoply of additional benefits. "Banking is a scam in which people with authorized signatures make huge profits by not working." he says. "A lot of conservatives were fed up with the banking system even before we were. So here in Ithaca we decided to start our own game." By trading with Hours, Ithacans declare their allegiance to their town and add a touch of warmth to microeconomics. As Glover puts it, "The Hours system dramatically expands and acts as a banner for our sense of community."

In her office not far from the Route 13 strip, Linda Daybill, president of the Tompkins County Chamber of Commerce, is telling me about her job interview: "They asked me if I would accept Ithaca Hours as payment for chamber membership dues if I were president. I took a deep breath and said yes. I'm pretty sure that's what got me the job."

Daybill, whom Glover describes as "cool," is clearly not your average Chamber of Commerce president. She talks about the need to find ways to support Ithaca's poor as welfare reform hits. She reminds me that Girlfriends magazine recently rated Ithaca as one of the most lesbian-friendly places in America. She calls Ithaca "a community of passionate people" who sometimes find compromise difficult but who make civic life an invigorating challenge. "Politics is serious here," she says, "but it's also part of our fun. Other towns have major-league sports; we have activism."

Daybill also talks candidly about what she considers to be one of Ithaca's major problems: underemployment. "We suffer from the Œtrailing spouse' phenomenon-the spouse of a Cornell faculty member or student who is overeducated, overqualified, but willing to accept a low-paying job," she says. "It creates a downward pressure on wages and upward pressure on qualifications, so there simply aren't enough entry-level jobs for the non­college bound."
Paul Mazarella, who runs Ithaca Neighborhood Housing Services, a low-interest lender that rehabs decaying housing stock and helps poor families buy homes, agrees that the gap between the poorer townsfolk and privileged if simplicity-craving alternative types is real. "People who are really poor have fewer choices than basically privileged people with intact families and good educations who may be living on $14,000 a year," he says.

Be that as it may, the underemployed alternative types have done much of the work in crafting a massive network of small nonprofit social service agencies, alternative health care providers, healers, mediators, and teachers of every stripe that actually-or potentially-benefit the whole community. Organizations like Recycle Ithaca's Bicycles and Recycle Ithaca's Computers connect low-income kids with used equipment. The Alternatives Federal Credit Union makes loans to people other banks wouldn't touch. The Homebased Microenterprise Network supports and promotes the hundreds of tiny businesses in town. The Ithaca Health Fund, now being organized, will be a local alternative to the big health insurers. Offender Aid and Restoration (OAR) pairs accused criminals and convicts with counselors.

I got a chance to hear about one way in which institutions like these support Ithaca's enlightened politics when I visited Tim Joseph and Leni Hochman in their plant- and pet-filled house, part of a nine-household cooperative in a woodsy precinct on West Hill. Hochman is a staff member of the Alternatives Federal Credit Union; Joseph is a member of the county board. A self-proclaimed radical, he's also-like Dan Hoffman and former mayor Nichols-a hardworking pragmatist who loves the nitty-gritty details of politics ("90 percent of what we do is not ideological," he says).
In the mid-'80s, Joseph worked for OAR as a counselor and a trainer of counselors. Part of the training was work in "deep listening." Four years ago, when a conservative taxpayers' group was hectoring the county board for its alleged free-spending ways, Joseph and fellow progressive board member Eric Lerner decided to listen to their opponents instead of simply struggling against them. They did more; they invited the tax protesters to sit on an advisory committee. "We came to respect each other," says Joseph. "And the protesters discovered they had to grapple with real funding problems instead of abstractions about fiscal responsibility."
If it seems like face-to-face politics works in Ithaca, well, it does. It has something to do with the powerful love of place that most Ithacans feel. It also has a lot to do with the manageable size of that place, and the fact that, as Linda Daybill says, "I see a lot of the people that my decisions affect right on the streets and in the restaurants."

Most of all, it's because Ithacans genuinely believe that individuals can make a difference. Sarah Pines, who lives in EcoVillage, is a shining example. Noticing how much perishable food was being thrown away in Ithaca, she recruited some volunteers and formed the Friendship Donations Network. Today, without a budget or funding of any kind, Pines and her friends move some 14,000 pounds of food, clothing, and household goods per week from supermarkets, hotels, restaurants, and individuals to 16 projects dealing with hunger and poverty in the city.
"If you believe in something," says Paul Glover, describing how the city works, "write a pamphlet with your phone number on it and post it in the Laundromats and bookstores. If three people call you, have lunch with them and call yourselves an organization. Post another notice. If five more people call, meet with them and issue a press release." Ithacans' willingness to follow this advice on a daily basis is the electricity that makes this not-yet-perfect town a bright light on the American landscape.
Posted by Ithaca Night Life, NY at 5:53 PM